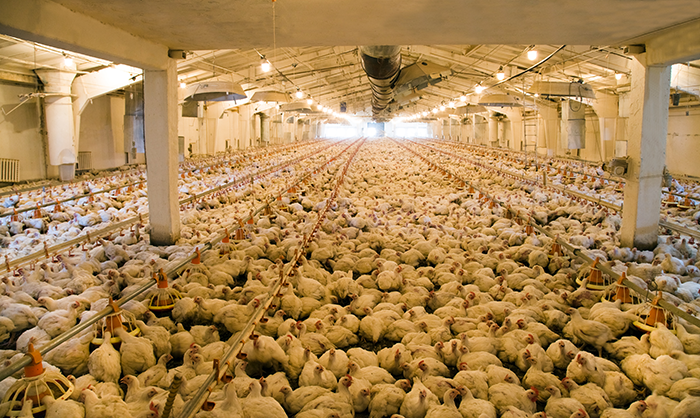 A few dollars per pound is a bargain, but who else pays the price?

by Peter Singer and Jim Mason

Americans eat a phenomenal amount of chicken, more than any other meat. Those of us over 50 can still remember when chicken was a treat for special occasions because it was more expensive than beef. Today, chicken is the cheapest meat, and its consumption has doubled since 1970. Advocates of factory farming boast that their techniques have brought chicken within the reach of working families.

Tyson Foods proudly calls itself “the largest provider of protein products on the planet,” as well as “the world leader in producing and marketing beef, pork, and chicken.” Tyson now produces more than 2 billion chickens a year, and if you are shopping in a typical American supermarket, close to a quarter of the chicken you see on the shelves will have been produced by Tyson.

Virtually all the chicken sold in America — more than 99 percent, according to Bill Roenigk, vice president of the National Chicken Council — comes from factory-farm production similar to that used by Tyson Foods. The ethical issues raised by its production of chicken therefore exemplify issues raised by modern intensive chicken production in general. We can divide these issues into three categories, according to whether they most immediately impact the chickens, the environment, or humans.

The Cost to Our Ethics
To call someone a “birdbrain” is to suggest exceptional stupidity. But chickens can recognize up to 90 other individual chickens and know whether each one of those birds is higher or lower in the pecking order than they are themselves. Researchers have shown that if chickens get a small amount of food when they immediately peck at a colored button, but a larger amount if they wait 22 seconds, they can learn to wait before pecking.

Interesting as these studies are, the point of real ethical significance is not how clever chickens are, but whether they can suffer — and of that there can be no serious doubt. Chickens have nervous systems similar to ours, and when we do things to them that are likely to hurt a sensitive creature, they show behavioral and physiological responses that are like ours. When stressed or bored, chickens show what scientists call “stereotypical behavior,” or repeated futile movements, like caged animals who pace back and forth. When they have become acquainted with two different habitats and find one preferable to the other, they will work hard to get to the living quarters they prefer.

Most people readily agree that we should avoid inflicting unnecessary suffering on animals. Summarizing the recent research on the mental lives of chickens and other farmed animals, Christine Nicol, professor of animal welfare at Bristol University, in England, has said: “Our challenge is to teach others that every animal we intend to eat or use is a complex individual, and to adjust our farming culture accordingly.” We are about to see how far that farming culture would have to change to achieve this.

Almost all the chickens sold in supermarkets — known in the industry as “broilers” — are raised in very large sheds. A typical shed measures 490 feet long by 45 feet wide and will hold 30,000 or more chickens. The National Chicken Council, the trade association for the U.S. chicken industry, issues Animal Welfare Guidelines that indicate a stocking density of 96 square inches for a bird of average market weight — that’s about the size of a standard sheet of American 8.5-inch by 11-inch typing paper. When the chicks are small, they are not crowded, but as they near market weight, they cover the floor completely — at first glance, it seems as if the shed is carpeted in white. They are unable to move without pushing through other birds, unable to stretch their wings at will, or to get away from more dominant, aggressive birds.

If the producers gave the chickens more space they would gain more weight and be less likely to die, but it isn’t the productivity of each bird — let alone the bird’s welfare — that determines how they are kept. As one industry manual explains: “Limiting the floor space gives poorer results on a per bird basis, yet the question has always been and continues to be: What is the least amount of floor space necessary per bird to produce the greatest return on investment.”

The Cost to the Environment
In western Kentucky, the masthead of The Messenger, the local newspaper of Madisonville, carries the slogan “The Best Town on Earth.” But if you had been in the audience of a hearing at the Madisonville Technology Center on the evening of June 29, 2000, you would have had to wonder about that. The Natural Resources and Environmental Protection Cabinet of the Kentucky Department of Environmental Protection was listening to public comment on a proposed regulation for Concentrated Animal Feeding Operations, also known as factory farms. A long procession of citizens came up and made their views known. Here is a selection:

“Since Tyson took over the operation of the growing houses, there is a very offensive odor that at times has taken my breath. There has been a massive invasion of flies. It is hard to perform necessary maintenance on our property.”

“Uncovered hills of chicken waste attract hundreds of thousands of flies and mice… People, including school children, cannot enjoy a fresh morning’s air and can’t inhale without gagging or coughing due to the smell.”

“My family lives next to chicken houses. We caught 80 mice in two days in our home. The smell is nauseating … My son and I got stomach cramps, diarrhea, nausea, and we had a sore on our mouths that would not go away. We went to the doctor and my son had parasites in his intestines. Where are the children’s rights? Should families have to sacrifice a safe and healthy environment for the economic benefit of others?”

Western Kentucky is an example of a nationwide problem. In Warren County, in northern New Jersey, Michael Patrisko, who lives near an egg factory farm, told a local newspaper that the flies around his neighborhood are so bad, “You literally can look at a house and think it’s a different color.” Buckeye Egg Farm in Ohio was fined $366,000 for failing to handle its manure properly. Nearby residents had complained for years about rats, flies, foul odors, and polluted streams from the 14-million-hen complex. At the same time, Oklahoma Attorney General Drew Edmondson was threatening to sue Arkansas poultry producers, including Tyson Foods, saying that waste from the companies’ operations is destroying Oklahoma lakes and streams, especially in the northeast corner of the state.

Tyson produces chicken cheaply because it passes many costs on to others. Some of the cost is paid by people who can’t enjoy being outside in their yard because of the flies and have to keep their windows shut because of the stench. Some is paid by kids who can’t swim in the local streams. Some is paid by those who have to buy bottled water because their drinking water is polluted. Some is paid by people who want to be able to enjoy a natural environment with all its beauty and rich biological diversity. These costs are, in the terms used by economists, “externalities” because the people who pay them are external to the transaction between the producer and the purchaser.

Consumers may choose to buy Tyson chicken, but those who bear the other, external costs of intensive chicken production do not choose to incur them. Short of moving house — which has its own substantial costs — there is often little they can do about it. Economists — even those who are loudest in extolling the virtues of the free market — agree that the existence of such externalities is a sign of market failure. In theory, to eliminate this market failure, Tyson should fully compensate everyone adversely affected by its pollution. Then its chicken would no longer be so cheap.

WHAT YOU CAN DO

The surest way to start working against factory farming is to stop consuming its products. You can refuse to eat ‘milk-fed’ veal, factory eggs, feedlot beef and other factory-farmed animal products. Of course, you can stop consuming animal products altogether, as is recommended by an increasing number of health experts. In either event, consumer demand can make a difference in that it will encourage independent farmers to seek the safest, most humane methods in animal production lest they destroy their markets.

Individual dietary changes will not be enough, however. While you get your food shopping, preparation and eating habits under control, you should work actively toward broader changes in agriculture and food policy. Since consumer demand affects food production, we should begin by making the following demands: