Inside a Turkey Factory 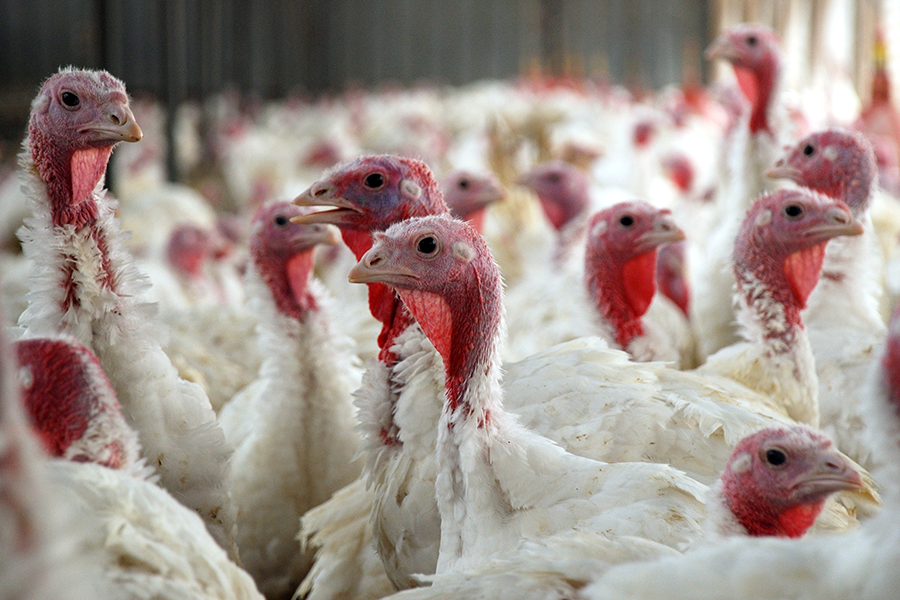 A friend heard an advertisement on the local radio about the Butterball Turkey Company needing workers in artificial insemination, called “AI” for short. So I went to the personnel office across the street from the turkey killing plant in this small midwestern town. Latinos, Asians, and poor whites filled the waiting room. Everybody wore rubber boots and big, puffy white hairnets — both men and women.

“Bob,” the AI boss, explained that the modern turkey business is about the “most high-technical” of all the animal operations. “The turkey is a creation of modern science and industry,” he said. “It’s been out of the wild only about 100 years, the last animal to be domesticated. Because of that wildness, it tends to go broody, which means it lays a few eggs once a year and quits. We have to trick it into laying all the time.”

Bob told me that the company’s birds are much bigger and more clumsy than the original turkey — so much so that they can’t breed by themselves anymore. So the company has to use AI to produce the fertile eggs that hatch the chicks who then go into “grow-out” houses and grow up to be slaughtered and processed.

The Butterball Turkey Company is a division of ConAgra Turkey Co., a division of ConAgra Poultry Co., a division of ConAgra, Inc. of Omaha, NE (the agribusiness conglomerate). They hired me. I reported for work at 4:45 a.m. I was told to go with “Joe” and his crew. Joe grunted at me, then barked, “Follow me in your car.” Down a gravel road, the lights of a turkey building glowed ahead. We parked. Joe handed me a dust mask and grunted something. When I didn’t move, he yelled, “Get a hold of this and help me take it in.” It was the insemination machine, about the size of a TV set. As we walked toward the building, a worker came out and pitched two dead birds out the door.

Inside the building, I saw a sea of white hens. (Three thousand, I was told later.) The flock was divided in half by a double row of metal “nests” down the middle of the building. From these nests, a row of conveyer belts carried eggs.

Joe did not explain the work to come, nor did he introduce me to the other crew members — all silent, surly-looking white men in their 20s. They set up the AI machine quickly and went to work.

Two men herded birds a hundred or so at a time into a makeshift pen along one side of the house. From there, these “drivers” forced 5-6 birds at a time into a chute, which opened onto a 5×5-foot concrete-lined pit sunken into the floor of the house. Three men worked belly-deep in the pit: two grabbed birds from the chute and held them for the third, Joe, the inseminator.

They put me to work first in the pit, grabbing, and “breaking” hens. One “breaks” a hen by holding her breast down, legs down, tail up so that her cloaca or “vent” opens. This makes it easier for the inseminator to insert the tube and deliver a “shot” of semen.

Breaking hens was hard, fast, dirty work. I had to reach into the chute, grab a hen by the legs, and hold her — ankles crossed — in one hand. Then, as I held her on the edge of the pit, I wiped my other hand over her rear, which pushed up her tail feathers and exposed her vent opening. The birds weighed 20 to 30 lbs., were terrified, and beat their wings and struggled in panic. They were very strong and hard to hold.

With the hen thus “broken,” the inseminator stuck his thumb right under her vent and pushed, which opened the vent and forced the end of the oviduct a bit. Into this, he inserted the semen tube and released the semen. Then both men let go and the hen flopped away onto the house floor.

The insemination machine’s job was to put a calibrated amount of semen into small, plastic “straws” for the inseminator. Each straw was about the size of a drinking straw 3-4 inches long.

The machine drew semen from a 6 cc. syringe and loaded the straws one at a time. With the tip of a rubber hose, the inseminator took a straw, inserted it in the hen, and gave her a shot.   Routinely, rhythmically, like a well-oiled machine, the breakers and the inseminator did this over and over, bird by bird, until all birds in the house had run through this gauntlet.

The semen came from the “tom house” where the males are housed. Here “Bill” extracted the semen bird by bird. He worked on a bench which has a vacuum pump and a rubber-padded clamp to hold the tom by the legs. From the vacuum pump, a small rubber hose ran to a “handset.”  With it, Bill “milked” each tom. The handset was fitted with glass tubes and a syringe body; it sucked semen from the tom and poured it into a syringe body.

I helped Bill for a while. My job was to catch a tom by the legs, hold him upside down, lift him by the legs and one wing, and set him up on the bench on his chest/neck, with his rear end sticking up facing Bill. He took each tom, locked his crossed feet and legs into the padded clamp, then lifted his leg over the bird’s head and neck to hold him. Bill had the handset on his right hand. With his left hand, he squeezed the tom’s vent until it opened up and the white semen oozed forth. He held the sucking end of a glass tube just below the opening and sucked up the few drops of semen. It looked like Half & Half cream, white and thick.

We did this over and over, bird by bird, until the syringe body filled up. Each syringe body was already loaded with a couple of cubic centimeters of “extender,” a watery, bluish mixture of antibiotics and saline solution. As each syringe was filled, I ran it over to the hen house and handed it to the inseminator and crew.

Each tom house contained about 400 males, 20 to a pen.  The toms are milked once or twice a week until they are about 64 weeks old (16 months), by which time they can weigh up to 80 lbs. The hens are inseminated usually once, sometimes twice a week, for about a year. When these breeding birds reach the end of their cycle, they are killed and turned into lunch meat, pot pies, and pet food.

This pace pressured the drivers to keep a steady flow of birds in the chute to supply the pit. Having been through this week after week, the birds feared the chute and balked and huddled up. The drivers literally kicked them into the chute. The idea seemed to be to terrify at least one bird, who squawked, beat her wings in panic, and terrified the others in her group. In this way, the drivers created such pain and terror behind the birds that it forced them to plunge ahead to the pain and terror they knew to be in the chute and pit ahead.

The crews worked at this pace from 5 a.m. until 2 p.m., when I left. They had two more hours of work to finish off the second hen house. That’s 11 hours at a stretch with no formal breaks. No morning breakfast, no lunch hour. The only breaks came by chance, when a machine malfunctioned or when the semen syringes were slow to come.

At about 12 or 1, the bad-tempered Joe got suddenly generous after yelling and barking orders all day and bought everyone a “sody.”  He was not our buddy, but our paternalistic leader. We got to sit outside among the swarms of flies buzzing over a pile of dead birds and drink cokes for 10 to 15 minutes while Joe and another guy ran an errand.

I asked the least belligerent co-worker about the workload and the pace, the no-breaks routine. He told me that the crews are given 30 minutes off for lunch, but that his crew (under Big Bad Joe) worked through this lunch break in order to get paid for the time. These guys worked at this pace 10 to 12 hours straight without a break or a bite to eat just to get another $3 on their paychecks. I put up with this for a day because I thought I might learn lots of secret stuff from the crews. Fat chance. Nobody talked. Nobody talked about anything. The few times I tried to make conversation, all I got was surly, glowering looks, and a grunt or two.

I have never done such hard, fast, dirty, disgusting work in my life. Ten hours of pushing birds, grabbing birds, wrestling birds, jerking them upside down, pushing open their vents, dodging their panic-blown excrement, breathing the dust stirred up by terrified birds, ignoring verbal abuse from Joe and the others on the crew — all of this without a break or a bite to eat (not that I could have eaten anything amongst all this).

Working under these conditions week after week (Bill had been there for four years), these men had grown callous, rough, and brutal. Every bird went through their merciless hands at least once a week, week after week, until they were loaded up to be killed.